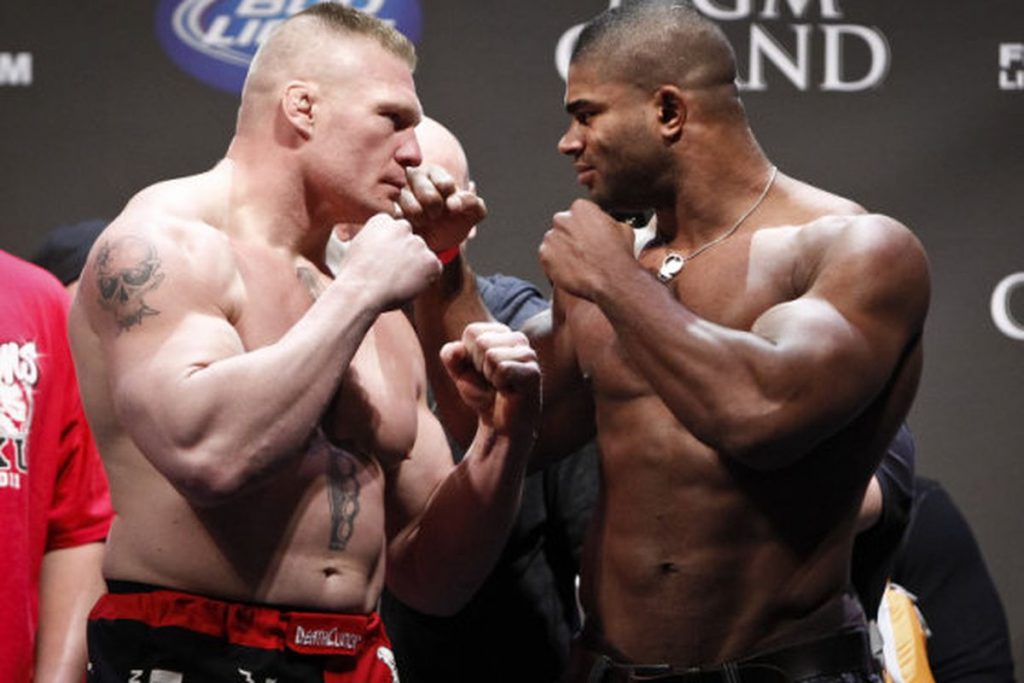 A fighters’ prime; the often small window of time where an athlete peaks and can, at the top level, seem unstoppable. Over the years, the mixed martial arts scene has bared witness to versions of fighters which have proven near-unbeatable, with comedically specific elements of their game or life contributing to sustained periods of success. We take a look at some of those golden eras and alter-egos, with no myth a stretch too far.

Alright, we’re easing into it here. It’s a timely one too. Legendary Dutch kickboxer Overeem went on an absolute tear between 2007 and 2012, picking up 11 consecutive wins in five different promotions en route to collecting the inaugural Strikeforce and DREAM heavyweight belts.

Where does the name ‘Ubereem’ come into it? The dude was jacked. Before his scheduled fight against Junior dos Santos in 2012, Overeem tested over double the allowed testosterone-to-epitestosterone ratio. No shit.

The final fight of the run in question came in his UFC debut against Brock Lesnar, another man who has notoriously proven to be pumped to the gills with PEDs. The pre-USADA days of MMA made for cloudy cases in that department, but also provided great entertainment.

Velasquez is rightly regarded as one of the greatest heavyweights of all time, credit to his game-changing cardio and well-rounded skillset. The two-time UFC heavyweight champion boasted a formidable 13-1 professional record and looked like never again being beaten.

Velasquez, a Mexican-American would defend his title in Mexico City – a well-strategised marketing move from the UFC. But the city’s elevation would work to sap the champ’s energy like never before seen, leading to Fabricio Werdum’s opportunistic submission of the wilting sea level Superman. Ravaged by injury ever since, it would be a crying shame to forget just how good Velasquez was… at sea level.

The name is weak, but you get the picture. A notorious partier, Jones’ antics would often be pushed to the outer on account of his incredible form in the octagon. The UFC’s youngest-ever champion still remains undefeated (unofficially) and has never relinquished his light heavyweight title.

Bringing up Bones’ misdemeanours would be superfluous at this point, but the Jackson Wink phenom looked a whole lot more ominous in his early days as champ, finishing opponents in five of his first six title bouts. Since seemingly attempting to change his ways, Jones has edged decisions in seven of his last eight fights.

Having embraced his partyboy ways in the build up to his second fight against nemesis, Daniel Cormier, perhaps Jones also looks back at that kind of preparation fondly.

The mythical Dark Place GSP spawned while the long-time UFC welterweight champion yearned for a fight with perennial contender, Nick Diaz. The Canadian was recovering from a long-term knee injury, with Diaz set to square off against Carlos Condit for the interim 170-lbs belt at UFC 143, in 2012.

To St Pierre’s dismay, Condit would take out a unanimous decision victory, forcing the Canadian to get through a unification bout before exploring that dark place with Diaz. The back-and-forth between the two was memorable, and Diaz’s pestering brought the best out of GSP in response with a view into his past, and yet another title defence.

Another legend of the sport, and another case of performance enhancers – only this time, it was legal. Testosterone replacement therapy (TRT) was legal in the sport until 2014, a practice which fighters could gain exemptions for in order to maintain their levels of, shock, testosterone.

It was essentially regulated doping, and proven doper Belfort was one of the many fighters to exploit the measure. We have all see the pre and post-TRT photos of Vitor, though the man himself often dances around questions surrounding the issue or his history with PEDs.

One of the most physically imposing fighters of his era, Belfort infamously TKO’d former UFC middleweight champion Michael Bisping while aided by TRT, detaching the Englishman’s retina and leading to him losing his right eye. Brutal.

One of the most saddening cases of a fighter’s greatness being overshadowed is Aldo’s, with the Brazilian’s unbeaten eight fights in the WEC one of the more incredible runs in MMA history. Fickle fans often forget how damaging Aldo was (and still is), especially during that two-year promotional run which included the absolute obliteration of Uriah Faber‘s legs.

Aldo’s run continued into the UFC with a further seven title defences and recapturing of the belt post-McGregor, but he has since been overtaken by the next generation, losing in four of his last six bouts.

One of the more remarkable statistics to come from a fighters’ record lies within that of Bisping. The former UFC middleweight champion and Ultimate Fighter (TUF) 3 winner went unbeaten across eight promotional bouts in the United Kingdom, including seven in England and his lone successful title defence at UFC 204.

Remarkably, ‘The Count’ also went 10-0 before entering TUF, with every one of those fights going down on home soil. Why didn’t he fight there all the time?!

Yes, we’re cheating by combining two versions into one, but they came in the same promotion and era. These two were among the most feared men on the planet in the early 2000s, both embarking on dominant runs in the now defunct PRIDE promotion which had the UFC scrambling for their signatures.

Silva had already featured in the UFC, but was famously poised for a return bout against Chuck Liddell in 2007, after his PRIDE run. The ‘Axe Murderer’ went 14-1-1 (1) between 2000 and 2004 in his reign as middleweight champion, he was just, scary.

Fedor would yield similar success at heavyweight as somewhat of a fabled figure, going undefeated across 16 bouts in the promotion between 2002 and 2006, with his run of wins later coming to an end in 2010 via a Werdum submission. Incredible, but we never got the chance to see him in the UFC.

His latest comeback, and the one before that may not have entirely gone to plan, but Cruz’s previous returns from long periods away from the octagon were nothing short of inspirational.

Against the odds and unfortunate spates of injuries, Cruz came back to win the bantamweight strap he had never previously lost in one of the all-time great feats of the sport. Cruz’s UFC title was first vacated in 2014 – almost three years after his last defence – due to recurring injuries, but he came back strongly later that year to defeat Takeya Mizugaki via knockout.

After another long-term setback, Cruz would reclaim his throne against TJ Dillashaw in 2016 and defend it successfully once in the same year, marking an incredible rise back to the top. Cruz’s third fight of 2016 would yield just his second career loss, and his next return would come in 2020 – almost another four years later – in yet another title bout.

His feats would match just about anyone’s had he been able to stay active throughout his prime. At 35 years old, he may now be past it, but has nothing more to prove.

The freshest of the lot, the feats of one Henry Cejudo. The 2008 Olympics gold medalist (if you didn’t already know) became the first person to claim Olympic and UFC gold when he beat Demetrious Johnson in 2018, bringing on the Cejudo era.

In a heel turn professional wrestling would be proud of, Cejudo rebranded as the ‘King of Cringe’, and would later earn the title of ‘Triple C’ after winning the vacant bantamweight belt. His over-the-top persona, pre-fight antics, trash talk, and the rest were something to behold while they lasted, and we may come to miss them after all given his sudden retirement at UFC 249.

Did we miss any? Let us know.