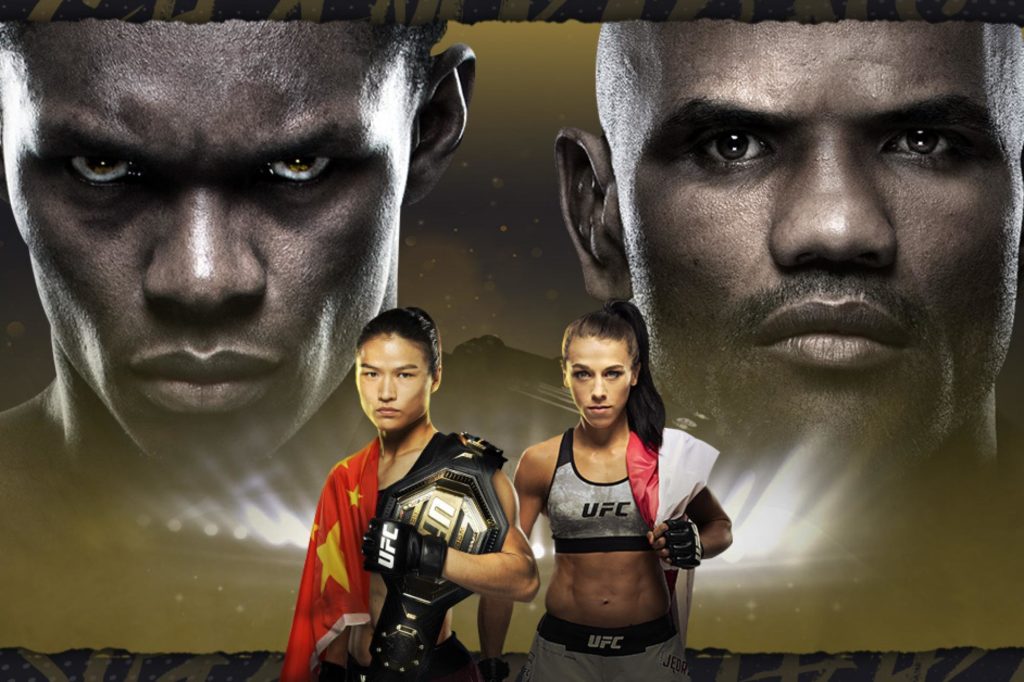 TWO UFC belts are one the line for the second time in 2020 at UFC 248, as Israel Adesanya and Weili Zhang take to the octagon for their first respective title defences. The enigmatic Nigerian gets his wish in facing middleweight boogeyman Yoel Romero, while Chinese star Zhang faces her toughest challenge yet in legendary strawweight Joanna Jedrzejczyk. The two title fights hold up a card bereft of ranked fighters, but featuring a fun mix of promotional staples and prospects to keep an eye on, making it a card not to be missed.

Ask and you shall receive – that is exactly the case for UFC middleweight champion Adesanya as he readies for his maiden title defence against the ‘Solider of God’, Romero in the UFC 248 headliner. Obsessed by cementing his legacy in the sport and proving naysayers wrong, the Nigerian hand-picked arguably the worst stylistic match-up possible – not to mention the man almost every other middleweight would be keen to avoid – in Romero, with the Cuban’s freakishly explosive athleticism and Olympic level wrestling pedigree making him a scary proposition.

Despite his fabled nature the 42-year-old is still human, highlighted by three losses in his last four bouts and failure to make weight for two previous title bouts. Given his 198lbs figure a week out from the fight, that factor could well come into play once again. But the veteran’s ability to lull his opponents into a false sense of security has been one of his craftiest tricks over the years, exploding at the unlikeliest of times to come up trumps on the big stage. Romero’s second official shot at UFC gold should bring the best out of him after consecutive losses, with time running out on his championship window.

That is something which has only recently opened for Adesanya who, like Romero, has expanded on his expertise in one discipline (kickboxing) to become a world class mixed martial artist in quick time. Much of ‘Stylebender’s’ justification for this bout has come from a desire to prove his quality as an all-round martial artist rather than a pure striker, with the greatest grappler at 185lbs no greater opponent to test those skills against. As cognitively dynamic as they come, Adesanya will have to be weary of Romero’s tricks and ready for that next-level athleticism, as it could spring at any moment.

While some would pitch this fight as somewhat of a foregone conclusion given Romero’s downfalls at the final hurdle, the Cuban is the perfect embodiment of the old saying that anything can happen in this sport, and that’s the beauty of this match-up. The purity of each man’s skill in opposing disciplines also makes it intriguing, and it will be a matter of whether Romero can successfully impose his grappling game on Adesanya, and whether the champion can withstand the varying threats to counter with his own game. Adesanya wants a finish, and it would take something special to become the first man to do so in Romero’s UFC career.

Asian superstar Weili Zhang makes her own maiden title defence against former strawweight queen, Joanna Jedrzejczyk in Sunday’s co-main event, with the Polish challenger looking to reclaim her belt at the second time of asking. The greatest strawweight of all time needs no introduction, and is poised to hand the current champion her toughest challenge yet.

Since being dethroned by ‘Thug’ Rose Namajunas in 2017 and falling short in the rematch five months later, Jedrzejczyk has earned her way back to the challenger spot on the back of two impressive wins at 115lbs – albeit against opponents further down the pecking order. A loss to Valentina Shevchenko for the flyweight strap spilt the defeats, but the Pole’s status as the winningest strawweight in UFC history to go with five title defences counts for a lot as she edges ahead of three other worthy contenders for another shot at UFC gold.

Zhang is one top-end strawweight who Jedrzejczyk is yet to share the octagon with, and thus throws up a completely fresh challenge for the 32-year-old Muay Thai practitioner. The UFC’s first-ever Chinese champion may have less UFC outings that her opponent has title bouts, but a 20-fight win streak points toward all the experience she needs to match it with a future hall of famer like Jedrzejczyk. Zhang’s clinical finish of Jessica Andrade to win claim the title was indicative of her power on the feet, but her dominant grappling means she will bring a well-rounded game to the octagon.

Both fighters are able to push the pace in different ways, with Jedrzejczyk’s technical volume striking wilting the will of many an opponent, while Zhang’s swarming pressure in the transitions adds to her undeniable knockout power. Given both women have only been finished once each in their careers, it may take something special to end the bout on either side, so expect more of a war of attrition whether the fight plays out up top or on the mat. Jedrzejczyk will back herself to find Zhang’s chin, it is just whether she can do so continually with the Chinese star coming the other way.

The three-fight win streaks of Beneil Dariush and Drakkar Klose run parallel no longer as the two prime to do battle in the third-last fight of the night. The two were set to meet in June, 2019 at UFC Fight Night 155, but the bout was scrapped due to injury on Dariush’s part.

A formerly ranked prospect, 30-year-old Dariush has gotten back on track over the last 18 months with three impressive wins over dangerous lightweight opponents. Consecutive performance of the night bonuses on the back of nifty submissions have the Iranian poised to make a run back into the numbers, and his black belts in both Brazilian jiu jitsu and muay thai bode well for more success wherever the fight goes.

But Klose is also dangerous on many levels, able to end the fight on the feet but also hailing from a solid grappling background. With both men being forced to overcome slight speed-bumps on their way to the top of a stacked division, this looms as a crucial fight in the long-term journey of their careers. Dariush has the high-end experience despite being a year Klose’s junior, so should fancy himself to capitalise on key moments at every level.

Journeyman and promotional mainstay Neil Magny makes his awaited return to the octagon against Chinese stud, Li Jingliang, with the latter looking to set the tone for compatriot and good friend, Weili Zhang in this main card slot.

While a reminder of Magny’s experience against some of the greatest welterweights of this generation would be superfluous, he may have to lean on it now more than ever given his extended period away from the cage. The American’s awkward style as a tall and long fighter makes him tough for any challenger, and he will undoubtedly be looking to get right back to his typically active ways to make a run into the rankings once again.

Jingliang’s seven wins in his last eight fights present an ominous proposition however, with his exploits well-known to the southern-hemispheric crowd. The 31-year-old is set for his first fight in the US since 2017, expecting to make good on having two of his three UFC losses away from Asian soil. A dangerous finisher on the feet, many would back Jingliang to make an impact if he can win the range battle, with Magny’s reach troubling for most.

Alex ‘Cowboy’ Oliveira will be out to rectify a three-fight losing skid when he faces Max Griffin to open the main card. But the fight looms as a key fight in the careers of both men given Griffin comes in with a 3-5 promotional record having failed to string together consecutive wins overall since 2016.

Nonetheless, this fight should be a fun one to jerk the curtain on the main card as both men are renowned for putting it all on the line with their all-action styles, which earns them considerable points from the promotion’s high-ups (see Griffin’s five-fight contract) and fans alike. Expect both fighters to bang on the feet, with durability no issue and an entertaining bout set to ensue. A tough one to pick.

– Popular Contender Series alum, ‘Suga’ Sean returns after over two years out.
– This bout was originally scrapped due to an O’Malley doping violation, re-booked for UFC 247 and then moved to this event.
– Quinonez is 1-1 since the original booking of this fight.
– Quinonez entered TUF at just 3-1, and made it all the way to the final.
– The undefeated O’Malley has a 70 per cent finishing rate.

– Madsen is an Olympic and World Championship silver medalist in Greco Roman Wrestling.
– The 35-year-old Dane is 9-0 so far in MMA with three KO’s, submissions, and decisions.
– Both men hold one win each in the UFC
– Hubbard was hospitalised with a rare condition post his maiden UFC win, requiring surgery.

– Vieira is a multiple-time Brazilian jiu jitsu world champion
– This will be the 6-0 Brazilian’s second UFC bout.
– Dagestani wrestler Safarov is 1-2 in the UFC, but coming off his maiden win almost a year ago.
– The fight marks Safarov’s return down to middleweight.

– Winn has been likened to AKA teammate, Daniel Cormier for his wrestling pedigree and size.
– Winn suffered his first loss in MMA last time out, but won his first four MMA bouts via TKO.
– Meerschaert has almost six times the amount of professional fights as Winn (41)
– Both men have fought as high as light heavyweight.

In 25 or less: Both women will be desperate to turn things around, and can win the fight wherever it goes.

In 25 or less: Batgerel boasts a win over Kai Kara-France, but Cannetti comes in the older and stronger man. Tough one.