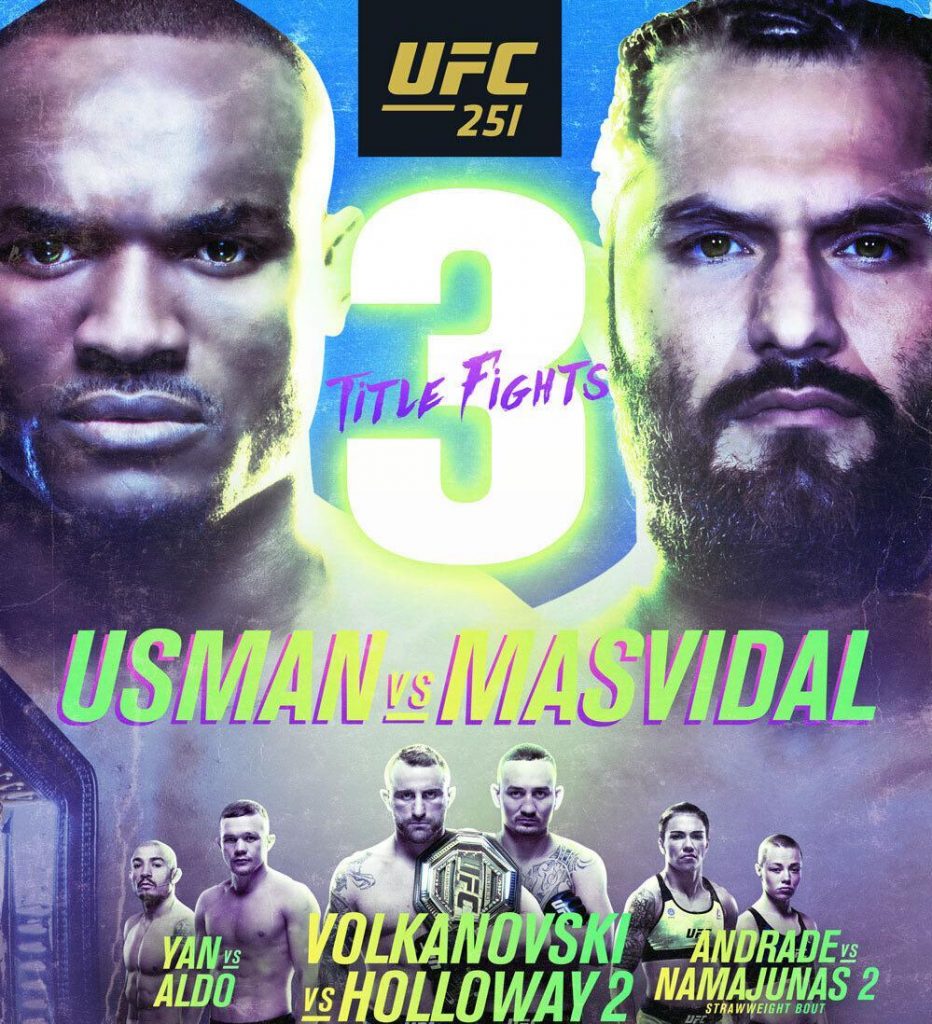 FIGHT ISLAND sets the scene for one of the most highly anticipated UFC cards of 2020, with no less than three championship belts put on the line across an incredible main card. The rollercoaster inflicted by the ongoing pandemic has not surpassed the UFC, but ‘Gamebred’ Jorge Masvidal lived up to his moniker in stepping in to challenge Kamaru Usman for his welterweight title after number one contender, Gilbert Burns tested positive for Covid-19.

Alexander Volkanovski‘s maiden featherweight title defence was momentarily poised to headline the event until Masvidal intervened, but the Australian will nonetheless have plenty of eyes on him as he looks to defeat former champion, Max ‘Blessed’ Holloway for a second time. Rounding out the title fights, a new bantamweight king will also be crowned when Petr Yan and former 145-er Jose Aldo lock horns for the vacant title, despite the latter coming in off consecutive losses.

The higher ranked fighter across each of these bouts remains unbeaten in the UFC, with each having lost just once over their respective professional careers. But they all face seasoned veterans who have once held UFC gold in some capacity, although we’re not entirely sure Masvidal’s ‘BMF’ title counts.

Rounding out the main card are two matchups from the female divisions, carrying implications on the title and rankings pictures in their own right. Former strawweight champions Jessica Andrade and ‘Thug’ Rose Namajunas are poised to complete their long-awaited rematch, ranked one and two at 115-pounds. At flyweight, Amanda Ribas will look to spoil Paige VanZant‘s comeback party, as they meet for what may be the latter’s last fight in the promotion.

We break down every fight on the stacked main card, give our predictions for each, and outline a potential sleeper hidden on the prelims.

>> SCROLL for the full fight card and predictions

The rise to superstardom has been meteoric for one, ‘Gamebred’ Masvidal, and a title fight triumph on six day’s notice against one of the most fearsome current champions would cap off his incredible, 18-year journey. This man came up fighting in Kimbo Slice‘s backyard and looked certain to take up journeyman status as the UFC’s welterweight gatekeeper, but that all changed in March, 2019.

Since baptising Darren Till in enemy territory and delivering a post-fight three piece to Leon Edwards backstage, the legend of Masvidal has grown immensely. A five-second knockout (the fastest ever) of Ben Askren might have also helped to build his legend, which was only cemented as he secured the ‘BMF’ belt in his infamous meeting with Nate Diaz, last year.

While the straightforward matchup for Usman after accounting for Colby Covington seemed to be Masvidal, the Cuban-American was jumped by Brazilian contender, Burns for the opportunity as he struggled to meet eye-to-eye with the UFC during contract negotiations. But Masvidal is surely now receiving all he is worth for the chance to hand Usman his first loss in the promotion, among the beautiful backdrop of Yas Island.

It is hardly rare that much of the talk coming into a title fight revolves around the challenger, but the current champ should have no qualms about the current narrative. Yes, Masvidal has nothing to lose either way and will be forever respected for his feats, and the late change of opponent is highly disruptive, not to mention Masvidal’s terrific takedown defence, but… wait, is anyone else thinking Masvidal might clinch this?

In all seriousness, Usman has looked near-unbeatable both in his run to UFC gold and during his short title reign, and will look to once again dominate the next name put up in lights to take him out. The champion has phenomenal cardio and smothering grappling, which he uses to wear on his opponents while pouring on punishing ground-and-pound.

There is not doubt that the longer this fight goes, the more chance Usman is of taking it out, especially given the late call-up and long haul flight Masvidal has embarked on. Usman does not quit, nor let up, and that could be a problem for the challenger past Round 3.

Masvidal does have that aforementioned takedown defence, going at a resistance rate of 77 per cent. The best chance for him to win will be via an early-ish KO or TKO, and the fact that every round starts on the feet plays into his hands. If Masvidal can remain on the feet for long enough or suck Usman into a striking battle, he has all the experience and power to take him out. He will have to remain wary of Usman’s power though, and the champ’s chin has proven to hold up well.

This fight should be an absolute corker and rightly fronts the event as a whole. It was the fight that made the most sense regardless of any outside circumstances, and boy are we glad that it’s actually happening.

A sense of deja vu may sweep over UFC fans should Volkanovski successfully complete his featherweight changing of the guard, but his co-main event adversary is a difficult one to put away. There are shades of the two-fight Holloway-Aldo rivalry in this matchup, as the incoming champion is being made to prove his initial salute was no fluke by taking out one of the division’s greats for a second time.

Volkanovski has gone on record saying that he believes ‘Blessed’ is salty about the result of their first bout, and bookies would have noticed a bizarre rise in the Australian’s stocks on the betting market after his Hawaiian opponent suggested he had been training with his coaches via video call for the upcoming bout.

Mind games and quirks aside, Holloway has a hell of a job on his hands to turn around the loss he suffered against Volkanovski in December, 2019, even if he thinks he won last time out. The new champion, who executed a brilliant gameplan to clinch the title, is hungry to keep his crown for a long time, and take over from where the former great champions left off.

Holloway will have to check the leg kicks which will inevitably come his way in order to properly execute his high-volume striking style, with movement a key part of that kind of game. On the other hand, Volkanovski will again face the incredible durability and high pace Holloway brings to the table, with his own movement and grappling prowess important factors.

But it seems Volkanovski wants to utilise his striking accuracy and heavy hands to finish Holloway and leave no doubt about his status at the top of the division, but the Hawaiian has only ever been finished once – via submission. The stakes are high and anticipation, even higher for this fight, with Australia’s sole remaining UFC champion backed by his nation once again.

The 135-pound title is set to finally find a home after the outgoing Henry Cejudo set it free earlier in the year, as Yan and Aldo square-off in Abu Dhabi. ‘Triple C’ has taken somewhat of an onus for Aldo’s consideration for this opportunity given he has lost consecutive bouts, but the Brazilian’s resume at 145-pounds as one of the all-time greats justifies his position alone.

Aldo’s most recent loss came in his bantamweight debut, but was a controversial split decision which he conceded to Marlon Moraes, helping him to remain in the conversation. On the other hand, there is no denying Yan’s credentials to this point, with the 14-1 Russian leaving a wake of destruction en route to his maiden UFC title shot.

Having most recently accounted for Urijah Faber in brutal fashion, Yan was a shoo-in to fight next for the strap regardless of who lined up on the other side of the cage. His ‘No Mercy’ moniker and style have brought pain to each opponent he has faced, often for each round of the fight. Yan possesses finishing power though, with his fast hands and severe power spelling danger for even the most durable adversaries.

Aldo is no stranger to finishing fights either, and is just as well-rounded as the Russian – if not, more so. His punishing leg kicks will be key to slowing Yan’s relentless pace, and it will be interesting to see whether the Brazilian can hold up once again under the heavy weight cut and inevitable Yas Island heat.

There are plenty of worthy contenders waiting in line at 135-pounds, so all eyes will be on this result. Yan’s reign could prove a long one if he gets up, while a victory for Aldo would see his legendary status only further cemented.

A second rematch for the night, and one of the most anticipated grudge matches for 2020 is finally set to take place in a deserving main card slot, with both Andrade and Namajunas returning to the octagon for the first time this year. Both women are coming in off devastating losses in title fights, with Andrade losing her crown to current queen, Zhang Weili, while Namajunas famously lost hers to Andrade via a slam KO.

In their May 2019 meeting, Namajunas looked exceptionally good across the first round and a half, before being emphatically thrown into the mat on her head in a freak moment which handed Andrade a maiden world championship. That kind of power, both in her hands and grappling make Andrade a dangerous opponent, but Namajunas has the smarts, movement, and skill to combat each threat.

The American looks to have regained her hunger and has already proven she can piece Andrade up on the feet, credit to her length and speed, but the fight could be ended at any moment at the hands of the Brazilian. It is a tough one to call, but will provide a terrific story of redemption either way for two former champions.

Another long-awaited, rescheduled women’s bout pits a Brazilian against her American opponent, as Ribas looks to continue her climb up the flyweight rankings. Once touted as a future title contender, VanZant’s career progress as slowed drastically in the face of recurring injuries and opportunities outside of fighting, and she has made no secret of the fact that this, the last fight on her UFC contract, may be the final time we see her in the octagon.

The American snapped a two-fight losing skid in January, 2019 and looked well on her way to regaining a number in the promotion, but has spent a heap of time out. On the other hand, Ribas has taken full advantage of her short time in the promotion, going 3-0 with three wins in just over a year. She is no stranger to halting a hype train either, having handed Mackenzie Dern her first professional loss.

VanZant has proven her toughness and ability to last under duress, but her time away may prove costly against the red-hot Brazilian. Ribas has the striking skills to match her opponent, and will also fancy herself in the grappling exchanges as a jiu jitsu and judo black belt.