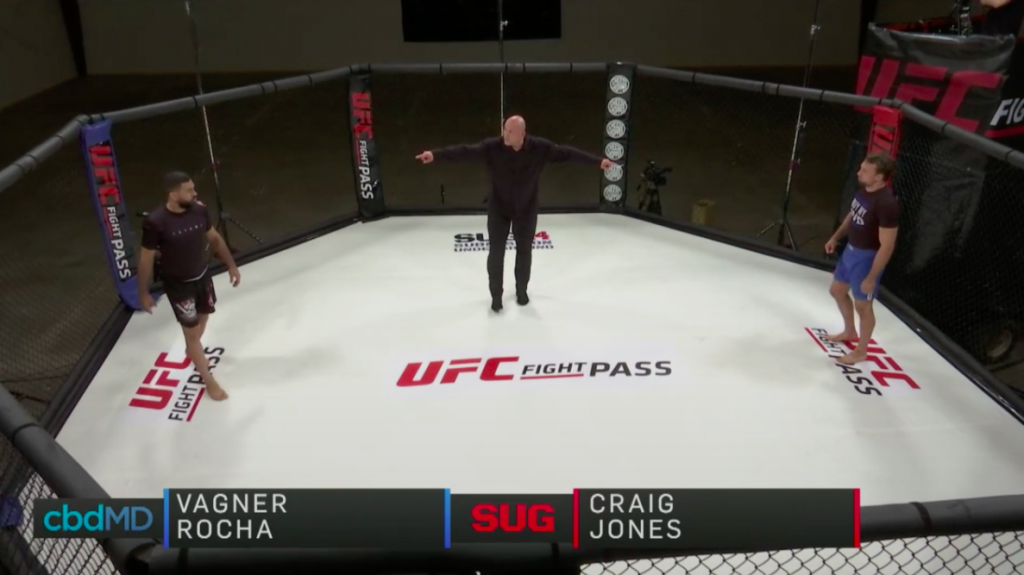 PORTLAND, Oregon once again played host to the latest Submission Underground (SUG) instalment, where Australian submission ace Craig Jones exacted revenge on Vagner Rocha in their main event bout. Dubbed ‘SUG Island’, the weekend’s event was the promotion’s third to be streamed live from a modified grain silo amid the current global pandemic, with SUG 15 set to take place on June 21 in the form of an eight-man tournament to decide Jones’ next opponent.

Check out the results from all 10 submission grappling matches, which produced nine submissions.

Jones added yet another acclaimed grappling name to his list of victims inside the SUG cage, tapping Rocha in overtime to keep his undefeated promotional record intact. The win serves as redemption for Rocha’s victory over the Australian in 2017, but did not come easy as the fight spilt into overtime.

Having immediately moved into his customary seated position, Jones began to look for avenues to isolate Rocha’s legs in his favoured half guard. But the Brazilian was well aware of Chael Sonnen‘s advice – if Jones is touching your leg, you’re in trouble. Rocha clearly respected the threats his opponent posed from bottom, but still found himself wrapped up in dangerous leg lock positions.

An unflappable Rocha managed to pull out of each tangle and maintain a safe distance to Jones, rolling out of one particularly nasty heel hook attempt to end up in top position. But Rocha was not keen to initiate the action, happy to ride out regulation time and try his hand at working the Australian from fixed positions in overtime.

There was a dubious moment toward the end of regulation where Jones questioned the slipperiness of Rocha’s legs, insinuating he was greased up before the fight. Bizarrely enough – and I can’t believe I’m writing this –  it was a result of sweat on the Brazilian’s freshly-shaven legs, and Jones retracted the complaint.

In overtime, Jones would take the back first and waste little time in slipping under the chin of Rocha, who showed a surprising lack of urgency in the face of obvious danger. Some persistence and a tight squeeze yielded the tap, and Rocha could not secure the same result on offence within the time limit.

Jones looks set to sit out the next SUG event, instead scouting out his next opponent in the newly-announced eight-man tournament. As the consensus best submission grappler on the planet, Jones is already running out of opponents.

This bout was supposedly organised after the last SUG event, where both men earned impressive victories over seasoned opponents. Having taken out black belts in bouts gone-by, this test proved one too far for purple belt, Vanderford as he was tapped in overtime.

Checco initiated the ground game by pulling guard first, looking to wrap up and isolate Vanderford’s arm but being met with strong posts by the American. ‘Zangief’ seemed to simply be looking for a reaction from his opponent as he repeated the arm-lock, wanting Vanderford to initiate the offence from top position.

Vanderford resisted the bait, grinding out the allotted regulation period from top position without necessarily making any real advances, but also not allowing Checco to do the same. ‘Mr VanZant’ began overtime on offence from the back after winning the toss, but could not lock his opponent in for long enough. On his second attempt, Checco locked Vanderford in from the back and eventually sunk in the rear-naked choke for victory.

Primus pulled off one of the more impressive submission victories of the night, tapping former Strikeforce champion and UFC title challenger, Shields in overtime. Of course, the fighter of Bellator fame also once held a world championship, and Sonnen was quick to point out he earned a jiu jitsu black belt in just six years.

While Shields fought as high as middleweight and Primus, lightweight, there was no distinct power difference between the two, and their toughness would shine through in an entertaining affair. Both were aggressive in the clinches, but on the mat had their strengths somewhat reversed; with the top-dominant Shields pulling guard and the bottom-friendly Primus refusing to let him get position with good top pressure.

After running out of regulation time, Shields won the toss to begin overtime on the back of Primus. While Shields expertly held Primus in the position for the full two minutes, he would be submitted in the very next inning. On offence, Primus would lean on his combination of strength and technique to pry Shields’ arm free and time the roll perfectly to yield a tap.

Holy pulled off one of the slickest moves of the night to make quick work of Alexander in their bout, sinking in a toe hold during regulation time. Holy abided with Alexander’s early guard pull but after a heck of a scramble, the pair found themselves in a leg lock battle. Alexander had pulled the position, but left himself vulnerable and saw Holy take full advantage as he swept under the ankle to lock it in and secure the swift submission.

Another prospect to make quick work of his opponent was Jimenez, who looks a likely type for the future having tapped the well-credentialed Stoner. Jimenez dipped for the takedown first but was met with a sprawl which would see him jump guard. It was no wonder he was so keen to get the position, as he scooted his legs up high, locked up the triangle and yielded a tap. Stoner did everything he could to stay calm and posture, but the strangle was tight. Jimenez may only be a couple of wins removed from meeting Jones, according to Sonnen.

The sole match to feature fighters wearing gis went down as McKay and Bessa scrapped, proving a refreshing break from the no-gi action. McKay was the first initiate on the mat and impressed with his flexibility in a rubber guard. Bessa would slip out and resist McKay’s climbing from bottom, unable to pass into mount himself as the two rode to overtime.

Blink and you may have missed the set up to McKay’s submission after being held well on defence in the first inning. Taking the back on offence, McKay momentarily lost the body lock but kept control and grabbed a nice collar choke to have Bessa submit – a technique we would not have seen in the no-gi bouts.

Nuro and Healy went at it in a physical bout, both getting busy on the feet as they struggled for collar ties and position against the cage. Healy was the first to grab for a leg, getting elevation but unable to complete the takedown.

The more aggressive of the two, Healy almost landed himself in a Nuro guillotine as the two hit the mat, but he survived and was kept busy by Nuro’s activity from the bottom. Having ground out to overtime, Nuro took little time in pouncing on an armbar submission, shifting his opponent’s focus to snap up an arm and yield the tap. Healy was unable to match the feat on offence.

Diaz Brothers prodigy Maximov made good on a lacklustre previous outing in the SUG cage, earning a slick regulation time victory over Fugitt. Having pulled guard after Fugitt defended a single-leg attempt, Maximov looked to attack by sitting up from bottom, before sweeping beautifully to isolate a leg and threaten the heel hook.

While that initial submission was not to be, Fugitt left his next out in the scramble and had it wrapped up in quick time to see Maximov take home the win via guillotine. A good step forward for the young prospect, who seems to like staying busy.

Gilpin’s standing kimuras were this time combated by some diligent homework and incredible spins out of the hold by Baker, who would later earn an impressive victory in overtime. Having come off a highlight-reel win at SUG 13, Gilpin repeatedly looked to his favoured submission on the feet, but was resisted solidly by Baker as they went to overtime.

Baker won the toss and it seemed both men would really look for the submission on offence. Baker ended up successful on his third attempt, with Gilpin unable to match the feat in the final inning.

Stecker and Corrales opened the event in the sole bout to have gone all the way through both regulation and overtime, with the former coming away with the win on escape time. Corrales looked the more active grappler during regulation, closing the distance quickly and smothering Stecker from top position. The two exchanged positions but saw no end, with Stecker’s superior ability to hold on offence granting him victory as Corrales was unable to wrap up the submission required.