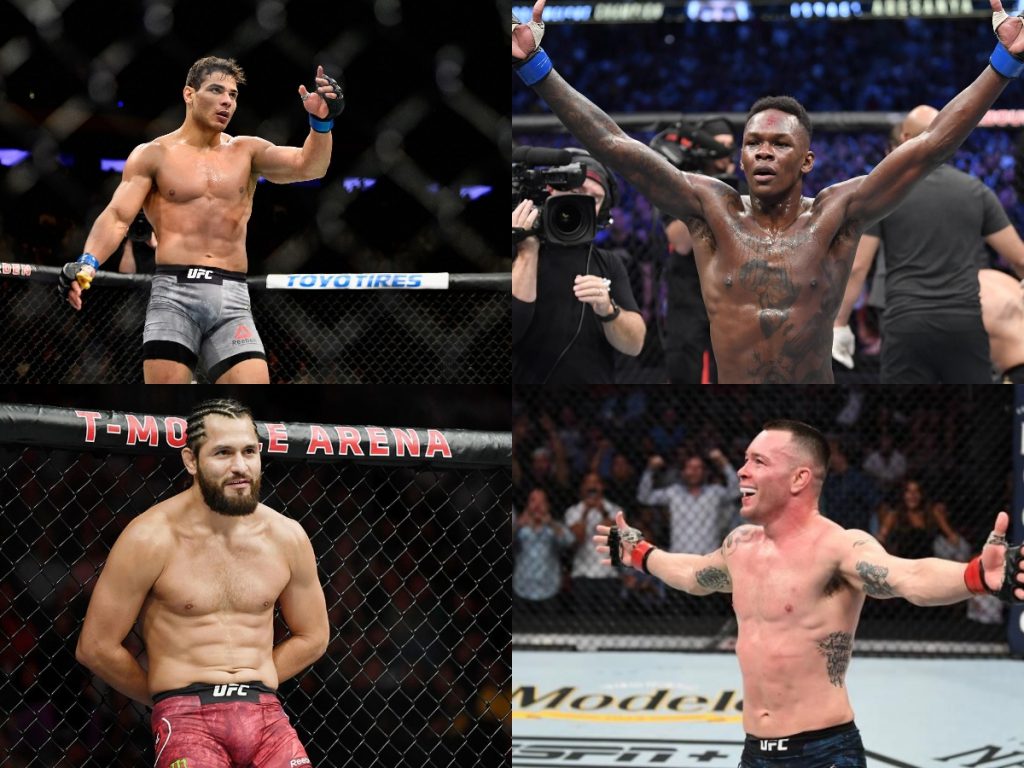 WITH over half the year already behind us and the leading mixed martial arts promotion back into the swing of things, we put on our matchmaking hat to bring you 10 fights the UFC should make before the end of 2020.

Having done the same before Conor McGregor famously head-kicked (or shouldered) the year off in style, we know there are plenty of variables to play out yet, but think these are the matchups which will take fans’ minds most off the shambles we are currently experiencing amid a global pandemic.

Note: The proposed fights are ordered by weight class, working down from heavyweight.

No, we’re not already looking past the trilogy fight between Miocic and Cormier, pegged as the UFC 252 headliner in August, but this is rather a point to say that Ngannou deserves a second title shot. The scarily powerful Cameroonian has been on a tear since late-2018, embarking on a four-fight run of first round KO/TKO finishes. Of his victims, former champion Junior dos Santos lasted longest – 71 seconds.

The guy is nuts, but if his latest victory (a 20-second KO over Jairzinho Rozenstruik) is anything to go by, the questions surrounding his technique, maturity, and avenues to victory remain. Miocic managed to thwart Ngannou last time out to retain his heavyweight belt, and Cormier didn’t seem overly impressed by his wild combinations while on comms, but we’re sure the number two ranked fighter has a point to prove. He only needs one shot, and hopefully doesn’t have to wait too long to get the chance to land it.

Has it been made yet or not? Many media outlets have gone with the story, but UFC president Dana White insists the dotted lines remained unsigned. Even before dispatching of Yoel Romero in one of the more forgettable title fights of all time, Adesanya’s most worthy next opponent has long been Costa. Injury has kept the Brazilian on the sidelines for a while, and he has made no secret of the fact he is chomping at the bit to be given a shot at UFC gold.

It is the fight that makes the most sense, despite the UFC bizarrely querying on social media whether the winner of Robert Whittaker and Darren Till‘s Fight Island bout should be next in line for a crack at ‘Stylebender’. In an interesting quirk, which only adds to the intrigue of the matchup, it would be only the second UFC title fight between two undefeated men since Rashad Evans took on Lyoto Machida at UFC 98 in 2009. Make it happen.

This one has only piqued the interest of late, and promises to keep things moving at middleweight. While Whittaker and Till will have their focus firmly fixed on coming out on top in their bout at the weekend, Hermansson has already made it known that he has eyes on the winner.

It makes sense too, with ‘The Joker’ fresh off a first round submission victory over former interim title challenger, Kelvin Gastelum, while the remaining pair in question are arguably the most deserving title contenders after Costa (see above). Hermansson’s grappling prowess promises to test the two polished strikers, with both also boasting terrific takedown defence. A good test all-round, but with parts still moving.

MMA fans have an almost perverse obsession with the old ‘friends-turned-enemies’ storyline, so this fight promises to give all you sickos a fix. After ‘Gamebred’ stepped in on late notice to challenge Kamaru Usman for the welterweight belt, his stocks are as high as ever, even in defeat. Covington has a lot less admires, including former teammate and best buddy, Masvidal, but is right up there with the world’s best 170-pound contenders.

Both now have a common defeat on their records, and it narrative aside, need to bounce back from those losses. With the likes of Gilbert Burns and Leon Edwards also looming as fresh and worthy adversaries for Usman, these two will need to again prove that they belong in the title conversation. Of course, they could be playing us all with an act, but we’d still like to see them go toe-to-toe.

Arguably the fight which seems most certain on this list is the one to unify the lightweight championship. The only factor which could possibly derail the plan of Gaethje earning his shot at undisputed glory, and rightly so, is the unexpected passing of Khabib’s legendary father, Abdulmanap Nurmagomedov. While the champ deserves all the time in the world to mourn and get back on track, if he decides to do so, this bout has been pitched for UFC 253 in September. Gaethje has also been offered Conor McGregor in the meantime, but… no.

We’re all for keeping divisions moving, and what better way to produce the next lightweight contender than to have these two go at it. The two never produce boring fights, period, and have both been so close to the undisputed crown having held the interim strap at varying points in time. Remarkably, the perennial contenders have yet to meet in the octagon.

Poirier has made it clear that he wants either a big name or a title shot having edged Dan Hooker via decision last month, and Ferguson deserves the same treatment having only just had his 12-fight win streak broken by Gaethje in May. Of course, the pair could wait for the Khabib-Gaethje matchup to pan out, but the best way to stake your claim is always to add a big name to your resume. Fans will always yearn for Ferguson to fight Khabib, too, so this may provide an avenue to that bout at long last.

While these two seemed cordial in the build-up to their proposed bout in December of last year, it would be no surprise to hear them both quote Uncle Dana in saying the other “was never (their) friend”. Things turned sour between the pair after Ortega pulled out of that main event dig with a knee injury, and was only made worse after ‘T-City’ slapped up Zombie’s translator.

They have been going back-and-forth for a while now and, pandemic permitting, should settle the beef this year in what would be an incredible fight. The featherweight title was only recently put on the line, and Aussie champion Alexander Volkanovski needs a new number one contender. Both may thing they are worthy, but arguably remain a win off that honour alongside Zabit Magomedsharipov.

Alright, we understand if Yan wants to spend some time with his belt before even thinking of his first defence, but it seems as if the decision has already been made for him. The Russian himself even acknowledged Sterling as the clear, undeniable contender, and it would only makes sense to finally give ‘Funkmaster’ a well-earned shot at the belt. In reality, this should have been the matchup made at UFC 252 for the vacant title, but alas we may get to see it soon enough. Let’s have it, that 135-pound division is stacked.

We just told you the bantamweight division is stacked, and a matchup between these two would only confirm that. This potential bout already has some wheels, with the two indirectly going back-and-forth over social media. The former champion has been there and done that, but only now looks like returning to his former glory after a redemptive win over Raphael Assuncao last month. The undefeated ‘Suga’ Sean is fresh of an equally devastating KO victory on that same June night, and looks to be the next big thing among the 135-pound shark tank. The fans love it, and it seems both fighters will too.

Another fight which looks extremely likely to eventuate is that between these two strawweight queens. It’s the only female matchup on our list, but man is it a corker. Zhang is still riding the wave of her maiden title defence in what was a fight of the year contender against Joanna Jedrzejczyk, and has already acknowledged the skillset of ‘Thug’ Rose.

The respect is clearly mutual, with a rejuvenated Namajunas enjoying the sound of this billed fight for the 115-pound strap, right after her entertaining decision win over Jessica Andrade. While Rose is arguably the most well-rounded fighter in the division, Zhang is a scary-good athlete with enormous power – a factor which wore on Namajunas in her most recent bout. It makes for an interesting stylistic matchup, and one we’re so keen to see.