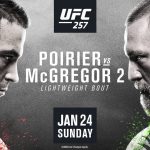 THE UFC’s first pay-per-view event of 2021 sees its biggest draw return to the octagon atop a stacked main card to be hosted at Etihad Arena in Abu Dhabi.

Fighters littered up and down the card will be keen to latch onto the attention garnered though the highly-anticipated main event, with plenty of statements to be made on the famed Fight Island.

>> SCROLL for the full card and predictions

Just over a year removed from his spectacular showing at UFC 246, ‘The Notorious’ Conor McGregor steps into the octagon for a second time against Dustin Poirier, but much has changed since their first meeting in 2014.

Both have gone on to claim UFC gold in the lightweight division but will be out to impress current title holder, Khabib Nurmagomedov and potentially earn rematches against the undefeated Dagestani champion.

They won’t be the only 155-pounders eager to claim their contendership status, with the co-main event pitting vicious New Zealand striker Dan Hooker against UFC newcomer Michael Chandler.

Hooker’s last bout saw him edged by Poirier in a five-round war, while Chandler has held brass in Bellator’s lightweight division and now makes the long-awaited move to MMA’s leading promotion.

Another title eliminator of sorts takes place as women’s flyweight contenders Jessica Eye and Joanne Calderwood lock horns, with both eager to climb back into the top five and claim challenger status.

Another women’s bout slots into the main card as Brazilian prospects Marina Rodriguez and Amanda Ribas do battle, both on hot streaks and holding the potential to rise steeply with an impressive outing.

A potential banger between two men with some of the best monikers going around rounds out the main card action, as Matt ‘The Steamrolla’ Frevola meets Ottman ‘Bulldozer’ Azaitar. The undefeated Azaitar has shown plenty during his short time in the UFC, but comes up against a tough Long Island favourite in this bout.