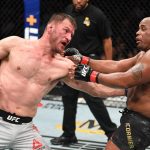 STIPE Miocic confirmed his status as the consensus UFC heavyweight GOAT, after edging Daniel Cormier via unanimous decision in their epic trilogy decider at UFC 252. The Ohio native (20-3), who fought in his seventh-straight UFC title bout now has four successful defences to his name, and improves his ledger against Cormier to 2-1.

Having battled Miocic three-consecutive times, ‘DC’ conceded that this may be the end of his legendary career, with another championship opportunity unlikely to present. Two of his three professional losses have come at the hands of Miocic, with the third part of the former double-champs’ other famous rivalry with Jon Jones.

The ‘and still’ champion was made to endure a raft of sneaky right-hand punches from Cormier throughout, but managed to remain upright through all of his adversary’s power while landing some heavy boxing combinations of his own. After being stunned at the end of Round 1, Miocic got his own back in the closing stages of Round 2, with a significant eye poke closing up Cormier’s left side in the third.

While Cormier looked to push the pace across the championship rounds, he was controlled well by the bigger man, Miocic in clinch engagements, which proved vital in nullifying the Olympian’s wrestling. Almost every five-minute period was as tight as they come, though Miocic’s diversity of strikes and control of position ultimately earned him the nod.

What’s next? It has to be number one contender, Francis Ngannou. Although, light heavyweight champion, Jones has also put his hat in the ring for a potential move up to heavyweight.

Jairzinho Rozenstruik could also be back on track for a shot at the heavyweight strap, after dispatching of former champion, Junior dos Santos in Round 2. ‘Bigi Boy’ was patient and respectful in his approach, but only required one clean combination to change the course of the fight.

The Suriname native swarmed on his seasoned opponent after dropping him with an uppercut and right hook, allowing him no time to recover as the referee duly stepped in. That’s now three-straight losses for ‘JDS’, while Rozenstruik (11-1) gains redemption for his punishing defeat to Ngannou in May.

The co-main event produced another banger, albeit if one of the competitors seemed to come away seriously compromised. Sean O’Malley was transported to hospital after potentially re-aggravating an old leg injury, which saw him stumble a couple of times during his fateful fight with Marlon Vera.

A clear underdog coming into the bout, Vera required just under five minutes to get the job done via TKO, pouncing on his flailing opponent and ending the show with some brutal elbows from top position. It remains unknown as to what exactly caused O’Malley’s leg to fail, as he was seen rolling his right ankle in the early stages. Despite that, the Ecuadorian pointed to his checking of O’Malley’s low kicks when queried in the post-fight interview.

Daniel Pineda was another to impress on the main card, halting the hype train of Herbert Burns with a second-round TKO victory. After six years out of the UFC octagon, Pineda made good on his return with an impressive performance on the mat against a renowned grappler. He ended the bout with some punishing elbows from the crucifix position, having proven much more active from top position than Burns.