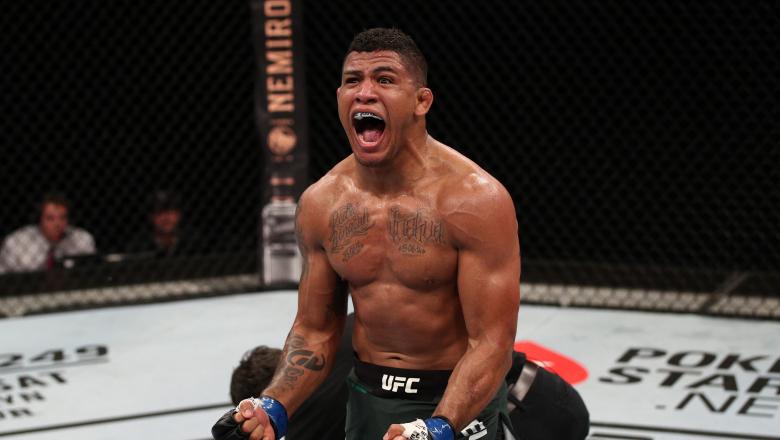 THE UFC has resumed full-time operations and with it comes the ever-changing rankings landscape. Four events have gone down since the promotion’s emphatic return at UFC 249 on May 9, with the only belt to change hands that of the interim lightweight strap belonging to Justin Gaethje. Among the big winners have been Gilbert Burns, Glover Teixeira, and Alistair Overeem, while their opponents all suffered drops down the rankings. The full, updated UFC rankings can be found here, and pound-for-pound list, here with changes soon to come after the weekend’s event.

Sakai’s co-main event decision victory over Ivanov saw him jump three places into 10th spot, while the Bulgarian slid the same amount to number 15 as the last of the ranked heavyweights. A random shuffle saw former champion Junior dos Santos move down to fifth, leaving Derrick Lewis clear in the number four spot. Those ranked 11-14 also moved around the two active men, with the MMA community now eagerly awaiting a trilogy fight between Stipe Miocic and Daniel Cormier at the top.

The big story to come out of the welterweight division was Burns’ rise to number one contendership, leapfrogging his opponent in former champion, Woodley, and the likes of Jorge Masvidal, Colby Covington, and Leon Edwards. The Brazilian earned a title shot against Kamaru Usman with his dominant decision victory, and it remains to be seen whether Conor McGregor, who swapped places with Anthony Pettis down to number 15, will be removed upon his shock retirement.

The big risers at 155 pounds were Darisuh and Dober, who each earned berths in the rankings of late. Most recently, Dober’s eye-catching TKO of former ranked lightweight Alex Hernandez earned him a spot, while stretching his win streak out to three. Random shuffles saw the aforementioned pair land at 14 and 15 respectively, while Donald Cerrone swapped places with Islam Makhachev to move to 12th, and the McGregor situation makes for some confusion at the top. Of course, Gaethje earned a title unification bout with Khabib Nurmagomedov after defeating perennial contender, Tony Ferguson at UFC 249.

A couple of rising prospects made the most significant leaps at featherweight, with Kattar moving to number six after defeating Jeremy Stephens at a 150-pound catchweight, while Ige continued his impressive run by defeating former lightweight contender, Edson Barboza via split decision. Allen, whose last fight was in January, was level with Ige in 11th spot, but moved one down to 12th in a random restructuring. A rematch between champion Alexander Volkanovski and Max Holloway has also been marked for UFC 251.

There will soon be some division-defining movement at 135-pounds, with three massive bantamweight fights going down on the UFC 250 main card. Number two ranked Aljamain Sterling made yet another claim for his long-awaited title shot by submitting Cory Sandhagen in quick time, but it seems Jose Aldo [6] and Petr Yan [3] will scrap for the vacant belt. Former champ Cody Garbrandt [9] got back to winning ways with a massive knockout of veteran contender Raphael Assuncao [5], while Sean O’Malley pushed his case for a ranking with his own statement KO on the same night.

Royval is the new prospect on the block, debuting at number 11 in the flyweight rankings after defeating former title challenger, Elliott in a fight of the night scrap on the Woodley vs. Burns undercard. Numbers 12-15, including Elliott were shuffled down, with De La Rosa pushed out of his number 15 spot and thus, the rankings altogether. Alex Perez [9] will also be a big mover having defeated Jussier Formiga [4] on the latest card, with Joseph Benevidez and Deiveson Figueiredo set to rematch for the vacant title.

There has been no movement in any of the women’s divisions, but that may be soon about to change as flyweights Jessica Eye [1] and Cynthia Calvillo [10 SW] headline the promotion’s upcoming Fight Night. Amanda Nunes of course successfully defender her featherweight belt against Felicia Spencer in the latest PPV event, while number two flyweight Katlyn Chookagian dismantled Antonina Shevchenko [12] in their bout, and Angela Hill was denied a berth in the rankings after losing a tight decision to Claudia Gadelha. Carla Esparza and Sijara Eubanks were other ranked winners, and Mackenzie Dern may find herself among the strawweight numbers after submitting Hannah Cifers in quick time.